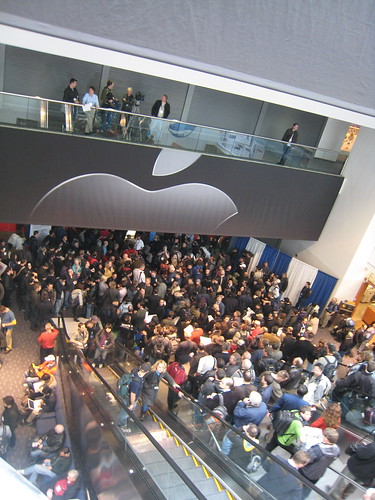 Apple’s decision to pull out of Macworld is a little like Simon Cowell taking a pass on “American Idol.” Sure, the show will go on, but in what form?

Naturally, the news caused a stir in the blogosphere, with one of the better posts coming from Philip Elmer-DeWitt at Fortune.
Although unlike Elmer-DeWitt, I don’t view Apple’s rationalization as “plausible”:

“Apple is reaching more people in more ways than ever before, so like many companies, trade shows have become a very minor part of how Apple reaches its customers. The increasing popularity of Apple’s Retail Stores, which more than 3.5 million people visit every week …”

Let me get this straight.
Macworld was nothing more than a vehicle for Apple to hand out sales literature and up-sell Apple Nation?
C’mon.
Macworld was never about “reaching more people.”
Macworld was the one time each year that Apple bonded with its customers with enough emotion to upstage Dr. Phil.
And the thrust of this emotion came from the master of storytelling himself, Mr. Jobs. Look at any of his performances from the Macworld pulpit on YouTube, such as the introduction of the iPhone in 2007. (Has anyone got more mileage out of the black mock turtleneck look?)

This man knows how to sit around the campfire and tell a story. By the time the curtain came down at Macworld, Steve Jobs had rekindled the audience’s care for all things Apple for another year and pushed their bad thoughts about premium pricing to the background.

While I’ve never jumped on the Apple bandwagon – I used to have an iPod but my son’s iPod broke, he snagged mine, and before I knew it my 8 gigs was filled with the likes of NOFX, Dirty Little Monkey and Dropkick Murphys – I do periodically check out their retail stores. A few of the salespeople have got the religion, but the venue doesn’t exactly lend itself to storytelling.
Furthermore, Apple has decided to roll out senior VP Philip Schiller to handle the company’s last keynote at Macworld ’09. Now there’s a fun assignment. Talk about drawing the short straw.
It could be that Schiller is a fine speaker. It could be that he even has stage presence.
But he isn’t Steve Jobs and that perhaps is the message from the Apple.
For whatever reason, Steve Jobs won’t be performing a Macworld keynote again. And without the brimstone and hellfire, there’s no point in Apple taking measurements for another booth in 2010.
Ishmael's Corner in your inbox