Like most business publications, the Journal has been covering the maneuvering related to the Supreme Court addressing the question on intellectual property:

When can a business method be patented?

As you would expect, stories have revolved around attorneys and CEOs informally pleading their cases that just so happen to align with their own interests. Not exactly scintillating content.

To the credit of Journal reporter Jess Bravin, he captures a wonderful anecdote in his story Justices to Test Patents For Business Methods:

In 1917, for instance, the U.S. Patent Office granted Clarence Saunders a patent for a “self-serving store,” where customers took items from shelves and brought them to a checkout counter to pay, rather than giving shopping lists to clerks who then fetched the groceries. Mr. Saunders licensed his patent to independent grocery stores under the name Piggly Wiggly.

Are you kidding me?

The action of walking down an aisle to pick up to a bottle of ketchup could be patented? (Which probably means someone also owns the patent on the salad bar concept.)

Back to the Piggly Wiggly –

It’s comforting to know that even back then, the U.S. Patent Office moved at its own pace.

I love the language in the actual patent:

The object of my said invention is to provide a store equipment by which the customer will be enabled to serve himself and in so doing, will be required to review the entire assortment of goods carried in stock, conveniently and attractively displayed and after selecting the list of goods desired, will be required to pass a checking and paying station at which the goods select may be billed, packaged and settled for before retiring from the store, thus relieving the store of a large proportion of the usual incidental expenses, or overhead charges required to operate it, all as well be herinafter more fully described and claimed.

Apparently, English teachers back in 1917 were a bit more tolerant of run-together sentences.

I have a feeling we’re going to hear more stories about Clarence Saunders and his unique patent in the coming weeks. 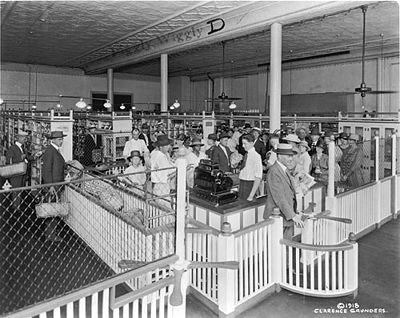 To net it out, companies ranging from IBM to Novartis to Amazon aspire to be Piggly Wiggly.

Side note: I suspect Jess Bravin, who works out of D.C., discovered this anecdote at the local Patent Museum which spotlights how Mr. Saunders transformed his patent into the Piggly Wiggly empire.