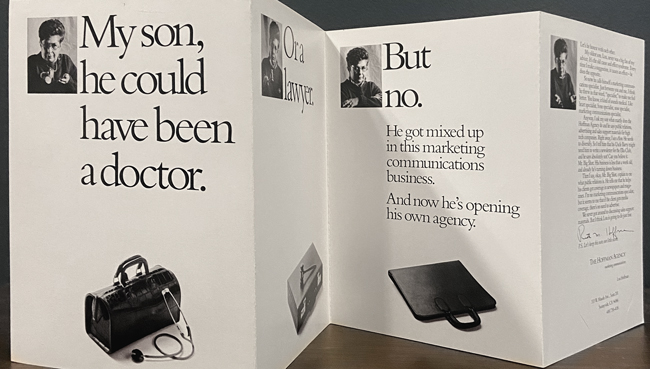 How is that possible?

No, please don’t answer that question. I’d rather not know.

The image you see above was the official announcement in 1987 which starred my Mom proclaiming that The Hoffman Agency was open for business. The vision of becoming a marketing communications consultancy — in today’s words integrated communications — has only materialized the past few years thanks to digital media rising in prominence.

There are literally hundreds of people who have contributed to the success of the Agency over the years, employees, clients, partners and gadflies. It would be foolhardy to try to acknowledge them all (not to mention deadly for SEO).

But there are a “few” people I want to call out starting with my wife and partner Heather who has sprinkled her pixie dust throughout the company from Day 1. The Agency wouldn’t be the place it is today without her unwavering support that comes in different forms. Consider the time she decided to sand blast the walls of the San Jose office to achieve a better “look and feel.”
. I also want to recognize Judy Hill (office manager), Tad Bixby (account staff) and Susan Baldwin (account staff), the trio who joined us in year No. 1 to get this enterprise off the ground. Talk about taking a dive of faith. If I could pin a medal of valor on their shirtfronts as I learned for the first time what it meant to manage, I would.

The Agency started with two clients. Meridian Data created a machine the size of washing machine for putting data on compact discs. I wrote the news release and pitched the story for that “bad boy” below.
. .
The other client was ShareData which designed software for administering employee stock options. At this point, you might be thinking it’s somewhat limiting to only target companies with “data” in the name. Our diversification strategy away from “data” companies took hold in early 1988 when we landed client No. 3, Hewlett-Packard’s CD ROM business.

It’s weird how certain events out of our control become business-altering moments. When Marc Hoff, HP’s general manager over the CD ROM program, asked then tech celebrity Esther Dyson for a PR recommendation, she referred me. To that point, I had said three words to Esther. Twice, I said “hello” to her at conferences and once she responded with a “how-are-ya” to which I uttered “fine.” That’s it. Not exactly the makings of genuine relationship.

Yet, the crack in the door at HP grew and grew and grew, shaping our trajectory for the long haul. You hear baseball fans refer to Yankee Stadium as “the house that Ruth built.” I think of the Agency as “the house that HP built.” Because this is where we proved that we could deliver a world-class product better than the big names, a byproduct also being a war chest that allowed us to fund expansion to Asia and Europe. Sure, it was painful when the HP-Compaq merger led to a consolidation of agencies which saw our relationship end, but the state of the Agency today makes the case that the tradeoff was worth it.

If you’ll indulge me to finish thanking the “academy.”

We have several folks who have been at the Agency for over 20 years (officially and unofficially): Chauncey Hill, Bonnie Lamb, Lydia Lau, Shingo Nomura, Maureen Tseng and Janice Wang. We are lucky to have you and what you bring to the company.

I also want to give a shout out to today’s leadership team: Caroline Hsu, Mark Pinsent, Nicholas Chan, Justin Gillespie, Steve Jursa, Natalie Kessler, Kymra Knuth, Kelly Kwon, Gerard LaFond, Kevin On, Kelly Stone, Stephanie Yang, and Frank Zhang (+ Lydia, Mo and Shingo). Coming out of the pandemic, to grow two consecutive years over 30% globally is a testament to their smarts, pluck (there’s a noun you don’t read every day) and utter disdain for the status quo.

Taking the requisite stroll down nostalgia land, the photo below depicts me during the Agency’s initial year of operation.
. .
In spite of all the changes that have transpired over the past 35 years, I still find the knowledge management system called “document piles” works pretty darn well. Before you call me a dinosaur stuck in the old ways, you’ll be pleased to know that I weaned myself off the Rolodex years ago and my current laptop has more than 20 megabytes of storage.

OK, where do we go from here?

I think it’s fair to say that we’re one of the premier agencies in the tech PR space. I also believe no agency on the planet can match our ability to execute multi-market campaigns for tech companies. We’re looking to strengthen that position by moving up the food chain and applying all forms of communications — right, back to integrated comms encompassing owned and paid media as well as earned media — to address client pain points. Also worth noting that we define “tech” broadly, not only the vendors that sell software and hardware but also the tech units within non-tech companies.

Our workplace delivers the foundation for our aspirations. For the longest time we stayed away from “directing” our culture. If people care about their colleagues and help others succeed, it stood to reason that those interactions would forge a collaborative and healthy culture. As we’ve grown, we’ve found it useful to frame our culture. For example, though our services don’t directly map to equality, climate change, homelessness and other causes that shape a better society, we still find purpose in cultivating an environment (people + work + culture = environment) that enriches people’s lives.

As part of our 35-year milestone, we talked to staff around the world to distill our culture down to its essence. The outcome was the riff “Geeks at heart” where curiosity and a belief in the possibilities win the day.
.

The best is yet to come.