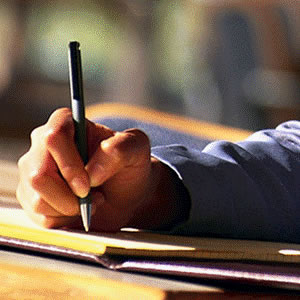 An essay in Saturday’s Wall Street Journal makes an argument that U.S. students need to spend more time in the classroom.

We learn that kids in China attend school 41 days a year more than their American brethren.

The author, Chester E. Finn Jr., goes on to roll out stat after stat – the typical American youth spends 53 hours per week on TV, videogames and the Internet versus 30 hours in the classroom; required courses in France took up 3,280 hours versus 1,460 hours in the U.S., etc. – with the upshot being our kids need to spend more time in school.

I think Mr. Finn’s sour disposition would perk up if he was aware of the literary “prowess” being developed in America’s high schools.

Back in January I posted on a listing of metaphors and analogies purportedly from high school essays, which didn’t exactly pull in the readers (to put it kindly).

With this in mind, I thought I’d take a second shot, pulling out of my favorites for Mr. Finn:

“She grew on him like she was a colony of E. coli and he was room-temperature Canadian beef.”

Shrewd to align storytelling with a timely topic like food contamination. But why Canadian beef? If you’re striving for the exotic angle, should have gone with Argentinean stuff.

“She had a deep, throaty, genuine laugh, like that sound a dog makes just before it throws up.”

The blending of Lauren Bacall and Old Yeller makes for narrative you don’t see every day.

“Long separated by cruel fate, the star-crossed lovers raced across the grassy field toward each other like two freight trains, one having left Cleveland at 6:36 p.m. traveling at 55 mph, the other from Topeka at 4:19 p.m. at a speed of 35 mph.”

On one hand, you shouldn’t feel like you’re taking the SAT to figure out a love story. On the other hand, the ambiguity pulls you in because you can’t be 100 percent sure when the lovers will actually collide.

“He fell for her like his heart was a mob informant and she was the East River.”

You don’t often see young authors pursue the mafia genre. While not exactly Mario Puzo, the personification of the East River shows promise.

“It was an American tradition, like fathers chasing kids around with power tools.”

You have to admit, fathers armed with chainsaws and the like deliver stronger imagery than men running around with wood paddles.

Back to the big picture, would this storytelling be stronger by spending more time in the classroom?

Let me study essays from those kids in China who spend 41 more days in school and I’ll get back to you.