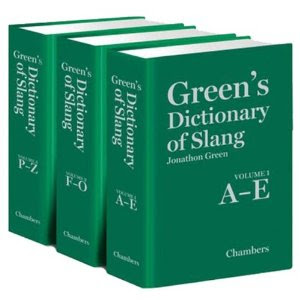 Fortunately, I made an exception last month.

“It provides a surreal, anachronistic delight one might have gotten from hearing Freud lecture on Charlie Sheen’s recent verbal diarrhea.”

How often do you hear a dictionary described as a “delight?”

As I followed the trail to Jonathon’s Wiki page, other articles – described by The Independent as the most acclaimed lexicographer since Johnson; yes, that Johnson – and finally his website, I often found myself smiling.

This fun with language and an unrelenting passion for words – How else can you explain devoting 17 years to writing a dictionary? – are themes that run throughout Jonathon’s work.

I reached out to Jonathon, who was gracious enough to grant me three questions. (I’m guessing “the genie is out of the bottle” made his cut.)

Here’s the first question and response.

Q: Your description of the work that goes into lexicography caught my attention (wonderful writing), particularly the line, “With this screen and books and book-shaped tools I chase down words.” Tell me about your most satisfying “chase” or perhaps one that you left you utterly surprised by the outcome.

A: The chase, I would suggest, far outweighs the kill. There have been many and I intend that there should be many more. However the sheer size of the work, and the constant movement from word to word, era to era, country to country, means that one rarely remembers a specific instance. And the nature of my craft is serendipity. Try as one must, nothing is guaranteed, especially as regards that holy grail, the tracking down of the ‘first use’. Two examples.

My partner, who researched many thousands of words, was reading a book. In this book she found a footnote, and decided that the title to which it referred might be worth pursuing. She read it, and therein found a use of shit! as an exclamation, some 60 years prior to that hitherto recorded. The book, an academic study of soldiers’ trials in the US Civil War had been published in the 1990s. On that level the discovery was simple. But all else was fortuitous: had the records not survived, had an academic not decided to research them, had his work not been published, had my partner not happened on the footnote….

GDoS was published in 2010 (2011 in the US). Necessarily the database was ‘frozen’ for editing purposes in 2009. Last month (February 2011) I purchased a new collection of stories from the pulp magazine Black Mask. They had not been published since the 1930s, and are not on line. I had not had the opportunity to read anyone’s private collection. In GDoS the word hooptie, a  car, often old, is dated to 1968. In a 1939 number of Black Mask I found an example: some 29 years earlier. Not so serendipitous – I would always buy such collections, knowing they are slang-heavy – but again, it was a chapter of events that had gone on beyond my researches that brought me this discovery.

Given there are roughly 110,000 words in the Dictionary of Slang, that’s a lot of chasing.

I’ll publish Jonathon’s response to the second question tomorrow and close the series with the final question/answer on Friday.

Note: You can read more from Jonathon fielding questions on Quora.