Putting the poster children of native advertising such as BuzzFeed, The Atlantic and The New York Times to the side, most of the content is downright dreadful.

The defenders are quick to say it’s early days, but its’ been a good four to five years since the industry starting chiseling away at this format.

To understand what’s gone wrong, it’s worth circling back to the definition of native advertising, this one from Dan Greenberg at Pando Daily:

In our view, native advertising should be broadly defined as ad strategies that allow brands to promote and weave their custom content into the endemic experience of a website or app. These native ad experiences differ from traditional digital ad formats such as display and pre-roll because they are choice-based placements (i.e., non-interruptive) that are well integrated into the visual design and content feel of a publisher’s site.

OK, now the simple version— Given a choice between journalism and advertising, people gravitate to journalism. So if brands can create advertising that looks like journalism, it stands to reason that more people will read the “advertising.”

Here’s the conundrum. If the “advertising” looks too native and too close to the editorial product, it stands to fool the reader. So publications have established wording and visual cues that tell the reader that this is paid content, not editorial. No media property wants to experience the public flogging that The Atlantic took in early 2013 when its native ad on Scientology looked too close to the real thing.

While the salesmanship that went into foisting the term “native advertising” on the industry is impressive, there’s nothing natural about the vast majority of native advertising that does interrupt and often jars the senses.

A Microcosm of What Plagues Native Advertising

This example from the San Francisco Chronicle offers a good microcosm of what retards the growth of this form of advertising.

You can see in the following image how the “native ad” shows up in my feed.

I’m reading the sports page on a Sunday, headline on the 49ers, a feed of local sports stories in the left-hand column and a feed of international  sports in the right-hand column. Sticking with the right-hand column, a native ad from Ford appears. Apparently, I missed an IOC vote that cast parking a car as an Olympic sport. Otherwise, how can Ford rationalize this ad as part of the natural sports feed?

And someone might want to let the Ford copywriters in on a little secret. Using words that one might find in a sports story like “tight spots” and “uphill battle” doesn’t transform copy on parking a car into one that feels like a natural fit on the sports page.

Clicking to the actual native ad delivers this. 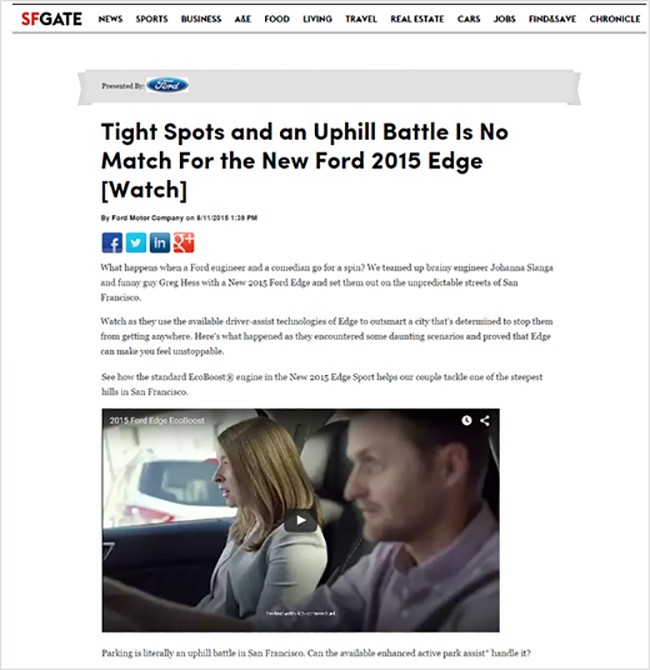 Again, it’s not native or good.

In spite of trying to camouflage intent with five videos starring “brainy engineer Johanna Slanga and funny guy Greg Hess,” this is a product ad about a Ford car. The San Francisco Chronicle would never assign this story to a reporter, and the content clashes with the natural story flow.

Worse, the ad commits the deadliest sin of all.

Effective Native Advertising Is the Exception, Not the Rule

If you search enough places, you can discover native advertising that works. A Denny’s native ad in The Onion delivers on the irreverence and parody of the Onion. 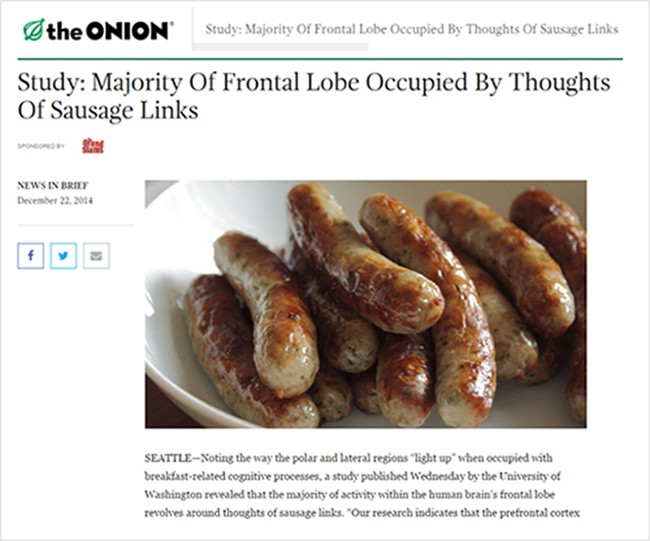 But the Denny’s native ad is a outlier.

Once you move away from publications like The Onion and BuzzFeed, it’s damn hard (and expensive) to develop native advertising that lives up to the definition.

Rather than try to change the trajectory of native advertising, the industry should invent a new category.

Anyone for “alien advertising?”