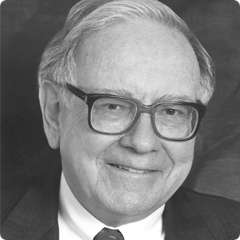 I wrote about Warren Buffett’s gift for storytelling last year.

If executives would simply take one lesson from Buffett’s communications, be conversational, the world would be a better place (cue the Coke music).

In his most recent letter to shareholders (2008), there’s a paragraph that showcases Mr. Buffett at his best.

All of us have read countless pieces about the economic downturn. They typically consist of rhetoric from politicians and jargon-filled analysis from economists.

Now, look at how Buffett couches the situation:

This debilitating spiral has spurred our government to take massive action. In poker terms, the Treasury and the Fed have gone “all in.” Economic medicine that was previously meted out by the cupful has recently been dispensed by the barrel. These once-unthinkable dosages will almost certainly bring on unwelcome aftereffects. Their precise nature is anyone’s guess, though one likely consequence is an onslaught of inflation. Moreover, major industries have become dependent on Federal assistance, and they will be followed by cities and states bearing mind-boggling requests. Weaning these entities from the public teat will be a political challenge. They won’t leave willingly.

Love the poker metaphor which brings both color and a double entendre to the topic at hand.

Great line, “…the Fed have gone all in.” You don’t have to spend time with Norman Chad watching the World Series of Poker on ESPN to get the drift.

The man knows how to turn a phrase and build drama: “Weaning these entities from the public teat will be a political challenge. They won’t leave willingly.”

For contrast, turn to the August 25 post from the blog of Peter Orszag, the director of the Office of Management and Budget:

First, let’s consider this year’s deficit. We now expect that the policies put in place to repair the financial system are likely to cost taxpayers less than previously anticipated. In particular, we have decided to remove from the budget a placeholder for further financial stabilization efforts that seemed prudent earlier this year.

Good stage-setting and everyday language (even if the word “prudent” seems like a hangover from the Bush administration).

He goes on to say:

I don’t know about you, but I feel better knowing the deficit has been chiseled down to $1.58 trillion.

OK, so far so good to this point.

But all of the sudden the conversation takes a detour to Narrative Hell:

As a result of a deeper-than-expected recession, certain spending programs (such as unemployment insurance and food stamps) are projected to automatically increase and revenues are projected to automatically decline, compared to our previous projection. Although these effects help to ameliorate the economic downturn by stimulating demand, they also lead to higher medium-term deficits both directly and indirectly (through higher interest costs on a higher level of public debt). Over the next 10 years, the net impact is to add $2 trillion to the projected deficit, compared to our last projection made based on February’s economic assumptions.That brings the projected 10-year deficit for 2010-2019 to $9.05 trillion – in line with CBO’s June projection.

As my high school English teacher would say, “too many moving parts.”

And what’s with “ameliorate?” I don’t think Mr. Orszag got the memo that the administration is striving to appeal to Middle America.

Needless to say, he’s not from the Warren Buffett school of storytelling.