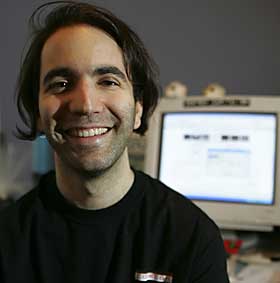 The inventor of the technology that brought digital movie sharing into the mainstream let the world know he suffers from Asperger’s syndrome.

“For Cohen, this has been a fraught journey into the sometimes bewildering world of the office. The social conventions that ease everyday interactions can still elude him. He doesn’t like to shake hands or wear shoes or make small talk. He often plays with a Rubik’s Cube. Sometimes when he is outraged, or more often when he is fatigued, he bursts forth with unwelcome candor. He can be oblivious, lecturing on solar cells or economic theory or euphemisms until someone stops him.”

Obviously, this vignette does not come from Cohen’s official bio, but he calls the overall story a “fairly reasonable portrayal” on his blog – albeit with too much emphasis on the Asperger’s angle.

I give credit to BitTorrent for providing BusinessWeek with no-rules access to Cohen, knowing that unflattering elements would inevitably surface (although the fact that the fired brother didn’t return the reporter’s calls was probably a good thing).

The payoff comes in the form of an honest look at the founder which ultimately humanizes the company.

Would BusinessWeek have devoted so many column inches to retell the story of yet another youngster gifted in mathematics challenging the establishment a la Napster?

There’s no way. But by setting the stage with Asperger’s as well as gaining perspective from those around him, BW gains the type of fodder that makes for good storytelling:

Then there was Bram himself. He could be disruptive. He likes to talk and play with his puzzles. “We have to keep him contained so others can work,” says Navin. “New employees didn’t know they could tell him they had to get back to work.” And his overly blunt but rarely ill-intentioned comments didn’t always go over well. Ivy Hsu, the office manager, was the first person Cohen and Navin hired. One day Cohen said to her: “I don’t understand the point of being detail-oriented. Only the dumb people in this world focus on small details.” Hsu has since learned how to deal with him. “You have to communicate according to the rules he understands,” she says. “You can cut him off, you can walk away. There is no point in sugarcoating things, because if you do, he may miss the whole point.

Obviously, the BusinessWeek reporter also sniffed out some discord between Cohen and the CEO at the time:

The executive BitTorrent hired is Doug Walker, who had led graphics software company Alias Technology in Toronto. He is circumspect when it comes to Cohen but does say: “You’re always going to have an honest conversation with Bram. To me that’s fair, even if you may not always like it.”

I say “CEO at the time,” since the company just named Erick Klinker as the new CEO.